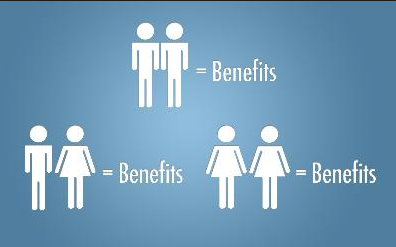 As more states begin to repeal bans on same-sex marriage, the uncertain issue of the future for domestic partnerships benefits arises. The U.S. Supreme Court struck down the Defense of Marriage Act (DOMA) in June 2013. This historic case was a catalyst for legalization of same-sex marriage in 19 states. This new political frontier is causing employers to consider necessary changes to their benefits programs as the landscape for both partnerships and marriage evolves on both state and federal levels.

For some businesses, the concept of domestic partner benefits isn’t solely reserved for same-sex couples. Many employers offer coverage for heterosexual couples as well, based on qualifications such as being in a committed relationship for a certain amount of time.

The concept of domestic partner benefits is also appealing for industries with larger populations of young employees. Maintaining these plans could be attractive company offerings for certain potential employees. In fact Apple, Cisco, Dell, eBay, Electronic Arts, Genentech, Google, HP, Intuit, Microsoft, Nokia, Oracle, Symantec and Yahoo all received a perfect score on the corporate equality index. Intel scored a 95 out of 100 for not offering completely equal “soft benefits” for same-sex partners.

Another perspective is that companies may consider the idea that domestic partnership benefits may no longer be necessary once same-sex couples are granted the equal marriage rights. One factor that could potentially push businesses towards dropping domestic partner coverage is the cost behind such programs.

On a federal level, the U.S. Supreme Courts decisions made in the U.S. vs. Windsor case have complicated the coverage and plan eligibility for same-sex couples. Any couple seeking federal tax benefits that lives in a state lacking recognized same-sex equality may now travel to get married in states that offer same-sex marriages without residency requirements. These federal benefits are covered in all 50 states and the District of Columbia. What you need to know about…